Carlos Saura began to play guitar at the age of 10. He later joined the Superior Conservatory of Music of Málaga and studied modern harmony and jazz with private professors. Carlos went on to form various rock and blues bands and achieved notable recognition in the region.

Afterwards, Carlos relocated to Barcelona, where he played with diverse bands, touring Spain and participating in blue festivals with groups like the Vargas Blues Band, M Clan and Graham Foster. Currently Carlos is at work on his own musical project while giving classes and seminars and playing in various groups. 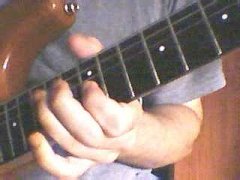 A large part of the material I use in class is based on the methodology of the Musiciams Institute (G.I.T.). This school’s method is excellent as it clarifies how and when scales, chords, and arpeggios are used and gives students great knowledge of the neck of the guitar, harmony, improvisation, music reading, and the training of the ear.

I also teach many styles, such as blues, rock, heavy, funk, and jazz as well as techniques like tapping, sweep picking, and ligados. In the classes I also make use of the recorded lessons of well-known guitarists like Scott Henderson, CarlVerheye, Keith Wyatt, Allen Hinds, Ross Bolton and others.

I give classes at my home in the center of Barcelona, very near The Ramblas. Classes are 50 minutes, which gives us ample time to review new material to be practiced during the week. Classes are given once a week in the afternoons for a fee of 80 euros per month.

Before deciding, new students are invited to a free class session to see what the classes are like and to ask questions.